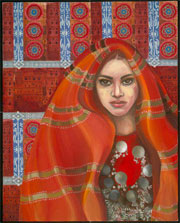 Queen of Yemen for over 50 years

Queen Arwa was orphaned at a young age and adopted by the king and queen of Yemen, her uncle and aunt. The queen, Asma, educated Arwa with poetry and the Qur’an, and she was known for her great memory. Arwa married the crowned prince; yet in a series of traumatic events, the king and queen died. Their son (Arwa’s husband) was paralyzed, and retreated from the public eye. Consequently, Arwa was catapulted into rule much sooner than she had ever expected. Queen Arwa focused her attention on the welfare of her people, setting up several centers for education for cultural and religious studies. She built roads, mosques, fountains, and Dar al-Izz, a grand palace of whose remnants exist today. She was the first woman to be accorded the prestigious title of hujja in the Isma'ili branch of Shi'a Islam. With religious authority, she ruled peacefully for over fifty years. She never lost support from the Yemeni people, who affectionately called her “Little Queen of Sheba.”