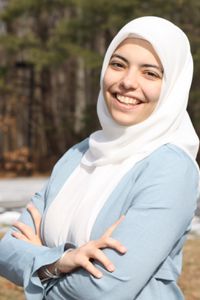 Abrar Omeish is only 24 years old, but she already made history by becoming the youngest Muslim woman in Virginia to hold elected office. In December 2019, Abrar won one of three vacant seats on the Fairfax County School Board. Omeish will continue serving that position until 2023 when her term ends.    Omeish has worked consistently with the Muslim-American community and advocating for women's rights for quite some time. During her time studying at Yale University, Abrar supported Muslim students and invited speakers to give talks about Islam. In 2013, Abrar made and internship for Congressman James P. Morgan, where Omeish worked to reduce women's restriction through a bill.   She joined the Tony Blair Faith Foundation's Interfaith Youth Action Group (IYAG), which fosters interfaith dialogue while facilitating projects that worked towards the Millennium Development Goals (MDG's) within the U.N. Abrar also spoke at the 2010 9/11 Unity Walk in Washington, DC. Abrar has been awarded several times for her active participation in social justice affairs. In 2012, Abrar was the Student Peace Award of Fairfax County recipient. Also, she received the Harry F. Byrd, Jr. Leadership Award (2012-2013). Then, in 2013 she was the D.C. Area Phi Beta Kappa Association Award and the Northern Virginians of the Year Award winner.    Besides being a politician, Abrar is the co-founder of Growth and Inspiration through Volunteering and Education (GIVE). This non-profit organization offers young adults resources to excel in education and leadership. Before running to become a member of the Fairfax County School Board, Abrar worked as a legal fellow at a human rights and immigration law firm in Northern Virginia. Also, Omeish collaborated as a spokeswoman for the #NoMuslimBanEver campaign. She was also elected as the President of the Fairfax County government Student Human Rights Commission. Abrar holds a double B.A. degree from Yale University, where she graduated with honors. Also, Omeish earned a dual Masters of Public Policy/J.D. from Georgetown University.